BlogsI have been supping an ale called Bo66y the past few days in my local pub. It has been brewed by Green King in readiness for the World Cup that is taking place at the moment. A donation is made from each pint that is sold to The Bobby Moore Fund for Cancer Research UK which is such a worthy cause. It is a light not to blonde beer coming in at 4.2% making it a good season drink. It is also being sold by the bottle and in mini kegs in supermarkets.

Now in its 25th anniversary year, the fund continues to go from strength to strength. Since Bobby’s death, mortality rates for bowel cancer have fallen by more than 30%, but sadly it still kills 43 people in the UK every day, so we still have so much more to do.

Our purpose is simple – to bring forward the day when bowel cancer is cured.

Please visit: The Bobby Moore Fund to find out more about such a worthy charity.

Now I am no skinflint when it comes to money however I do like to get value for money. This is no different when I buy a pint of ale. Here in the U.K alcohol is taxed and taxed fairly heavily compared to most countries. The stronger the alcohol content the more tax you will pay for your drink. That is why it annoys me that when I ask for a pint of  ale and I do not get one and I end up with a glass that is fairly full but with a frothy head on the beer that is an inch deep. I have asked politely and I am paying for the beer so I expect to get a full pint. My reply to that is “Err no, excuse me Mr. Barman I will have that pint that I asked for when you are ready please”. Now I must admit I have not come across a pub that has not taken the pint back and topped it up, but then again I really should not have to ask.

Now I understand that the further north you travel in this green and pleasant land it is preferred to have a larger head on your beer. Fair play to you, it is your pint and you have paid for it. If you want to look like you have a big bushy white mustache after your first sip then that is your choice. However would you change you mind if you knew how much of that gorgeous liquid that you are missing from your pint was going to the tax. Now don’t get me wrong I am all for paying my taxes as long as the taxes are being spent wisely, and in this day and age I believe that most of us probably think that they are. Seeing banks being paid off by the government when it was them that got us into the predicament in the first place. Our national gem of the NHS is on its knees needing cash and the high streets around the country are looking so poor with shops and pubs closing and betting offices opening.

Is this the reason that home brewing has taken off so much over the past few years because the pub are expensive and the appeal of the high street is not what is was? Are people are finding it cheaper, easier and more appealing to stay in? 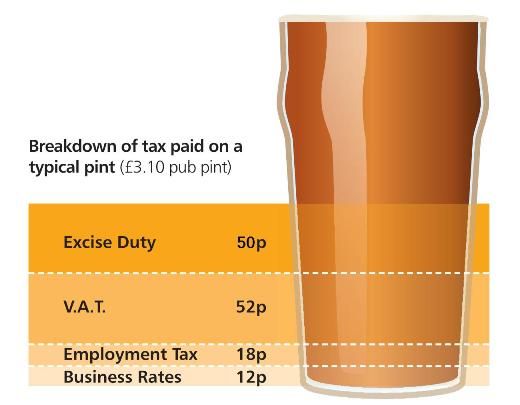 I am the Beer Cruiser and I live on the edge of a town in Essex in England. I am a forty something and I love drinking bitter and trying new ones. I make my own beer because like it some much and wanted to know more about it. I have had a bar made for me just so I can store my own home brews. I have travelled quiet bit through the UK and supped many an ale. I savour the delights the local brews while I am there.

I wanted to share my experiences that I have with drinking beer. Not just any beer might I add, but drinking bitter. Good traditional, proper English ale.  It entices me with it wide range of colours that can be golden to the dark rich stouts. They have delightful tastes that can tickle and dance on your taste buds to the one that are strong and powerful and show no mercy.  Then there are the aromas that fill my nose and can keep you guessing with the ingredients used. All of these items can make a good bitter but when they are balance correctly it keep me so satisfied.

I do like the social side of drinking. I tend to drink in pubs and not at home. I do my best to stay within my limits and not make and fool of myself, hence the name The Beer Cruiser rather than The Beer Steamer. I like being in the pub with my friends. I love chatting, the banter and the laughs that take place with the jokes the mick taking. Being introduced to new people and finding out more about them and what makes them tick. And to top it off, have a good, well-crafted pint of bitter on the go. But then again who doesn’t. Well we all want a part of that deep down, the feeling of being part of a group, being wanted and feeling needed?

So if you are like-minded then please feel free to get in touch via this site. I will not make out that I am an expert, far from it and I am not here to preach to people. I am an observer and I am just recording my observations. You do not have to agree with me and I am sure many of you will not, but please do not take offence. This is another reason why I like drink, it brings people together, it gets people talking.